Impact of the Russian Invasion of Ukraine on Environment, Climate Change and Green Energy Transition  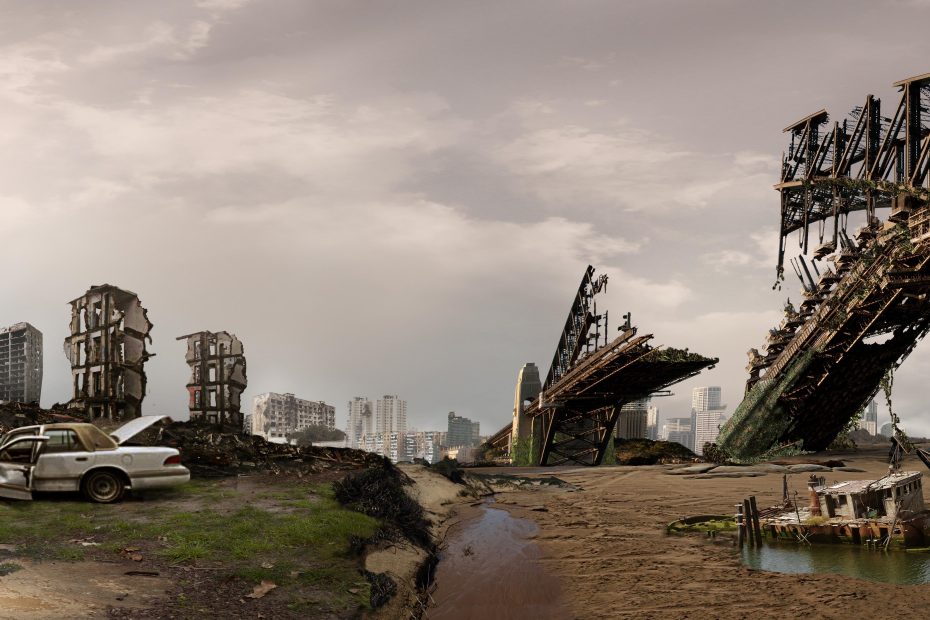 The Russian invasion of Ukraine is an unjustified and unprovoked act of aggression against an independent and sovereign state, as well as a violation of existing norms of international law and principles of human coexistence (Resolution A/ES-11/L.1). The use of heavy artillery and ballistic missiles does not only cause drastic loss of life, mass migration and food crisis but also has a considerable negative impact on the environment and global efforts to combat climate change. Having already inflicted devastating damage to Ukraine’s environment, the war threatens to bring the global climate crisis far beyond the expected scale, eroding states’ efforts to mitigate greenhouse gas emissions (GHG) and multiplying climate-related threats to global economy and international security. This blog highlights these multiscale impacts and the challenges they pose for environmental, climate change and energy transition policies.

The military assault of the Russian Federation on Ukraine has prompted the EU to start phasing out its reliance on Russian energy resources. Getting rid of Russian energy is absolutely indispensable to cease fuelling the anti-democratic regime of the aggressor country and stop funding and indirectly supporting the war in Ukraine. Yet, it is an extremely difficult task that comes at a very high cost. Russia is the third largest producer of fossil fuels in the world, which has always played a critical role in the global energy market. It is therefore not surprising that the Western sanctions against Russia, including freezing the Nord Stream 2 gas pipeline project by Germany, the ban on all Russian fossil fuels imports by the US and, more recently, the EU partial ban on Russian oil, affect many parts of the global energy system driving up prices for all types of fossil fuels worldwide. Meanwhile, Russia’s revenues are soaring, as Russia is rerouting its trade and oil exports to BRICS countries.

Thus, the Russia-Ukraine war poses new challenges for the future of the global energy system. But there is a silver lining. The war can accelerate the energy transition. Countries like Germany, being no longer able to rely on Russian fossil fuels, lose their attractiveness for energy-intensive industries. This offers a great opportunity for expansion of renewable energy with a double dividend for the economy and the climate.

The full transition to renewable energy sources cannot happen overnight though. While beneficial for clean energy investments in the long term, the higher prices for fossil fuels are likely to generate windfalls for fossil fuel companies in the short to medium term, as natural gas production and infrastructure expansion are planned around the globe with the argument to replace Russian gas. Moreover, the capacity of renewable energy to fully replace fossil fuel energy anytime soon is limited due to the intermittent nature of wind and solar energy and uncompetitive prices of green hydrogen.

In fact, the European Commission developed the REPowerEU plan, which outlines measures to drastically reduce Russian gas imports from its 2021 level of 155 billion cubic meters before the end of 2022 and reach complete independence from Russian gas well before 2030. While from the first glimpse REPowerEU seems to be a promising strategic document aimed at prioritising renewable energy, it is already predicted to be ineffective both for the phasing-out of Russian gas and for reducing fossil fuel dependency. The main reason is that REPowerEU is focusing on hydrogen production among other renewables. According to the recent technological review, hydrogen is capable of providing only about 10% of the power and heat needed by the global household and industrial sectors combined, which is obviously not enough to meet the EU energy demand. For that reason, experts substantiate that the plan increases the EU renewable ambitions only by a small part. This means that the EU will still have to rely on fossil fuel imports in the short to medium term.

Therefore, cutting off fossil fuel ties with Russia does not equal ceasing fossil fuels dependency as a whole. On the contrary, the imports and thus the extraction of gas and other fossil fuels are going to increase, questioning the compatibility with climate policy and energy transition. Norway has already announced to increase gas extraction in order to help Europe turn away from Russian gas. Proposals have also been made to reopen the Groningen gas field with the largest reserves of natural gas in the EU. Discussions on the expansion of gas supplies are ongoing with Qatar and Japan. Moreover, more gas imports are planned from Africa (Algeria is going to export additional gas via pipeline to Italy, Algeria, Niger and Nigeria are planning to revive a decades-old project to pipe gas across the Sahara etc.). The main hope, however, lies in the substitution of Russian pipeline gas with liquified natural gas (LNG) from the US. The European Commission in political partnership with the US has established a Task Force aimed at cutting Europe’s dependence on Russian fossil fuels and strengthening European energy security, while staying consistent with net-zero goals. It should also be noted that diversification of energy supply routes and increased use of LNG were also set as key policy aims of the Versailles Declaration issued by EU leaders in the wake of the Russian military assault.

The substitution of pipeline gas from Russia with LNG from the US and other countries is far from being compatible with meeting the urgent warming limit of 1.5 or 2°. Gas as such is less carbon-intensive and thus better for climate than coal or even oil, but still not ideal. It has been estimated that GHG emissions from burning gas for electricity for the EU are 41% to 151% higher than the 2030 emissions targets for electricity generation needed to limit global warming. As concerns LNG in particular, emission impacts for much of the LNG value chain – exploration, production, transportation, and the end use of gas – are similar to those for natural gas in general, whether used domestically or exported by pipeline. Therefore, LNG does not seem to be better for climate than pipeline gas. On the contrary, according to the International Energy Agency, around 11% of gas arriving at a liquefaction terminal would be combusted and therefore emitted as carbon dioxide (not methane), taking into account the entire value chain for delivery of US LNG to Europe. Therefore, although it is assured that efforts to reduce the GHG intensity of all new LNG infrastructure and associated pipelines will be undertaken, the aforementioned EU-US Task Force poses a risk to states’ continued commitments towards the mitigation of GHG emissions and contradicts the outlined global priority to cut the reliance on fossil fuels. Considering also the huge investments needed to build additional LNG terminals in Europe, which are expected to create stranded assets and lock fossil fuels in the EU energy system for several decades, it is much more meaningful to intensify investments in the expansion of renewable energy.

As regards Ukraine, the ongoing military action on its territory is expected to slow down the process of the country’s decarbonization. While Ukraine ranks 20th in the 2022 Climate Change Performance Index, thereby qualifying as a medium performer, its pre-war climate targets and policies were rated as “highly insufficient” and inconsistent with the Paris Agreement’s temperature limit, but rather corresponding to 3°C to 4°C warming. However, before the war broke out, Ukraine had started moving towards green energy. Now it is logical to expect that Ukraine will double down to minimize its reliance on Russian fossil fuels. With international financial and institutional support, Ukraine has a good chance of accelerating its transition away from Russian fossil fuels to green energy.

Besides affecting climate change mitigation through the changes in energy supplies, the Russia-Ukraine war has a direct impact on climate change. This happens through an increase in GHG emissions caused by warfare as a result of damaged gas pipelines, burning fuel tanks, numerous missile strikes on infrastructure and industrial facilities (e.g. Odessa fertiliser plants, Kremenchuk oil refinery, Uman greenhouse complex etc.). Moreover, the functioning of military equipment (especially tanks, military vehicles and ships) requires the enormous amount of fossil fuels increasing not only GHG emissions but also short-lived climate pollutants (SLCP), like black carbon, which in addition to being climate forcing cause serious health problems. According to the Ukrainian Nature Conservation Group, Ukraine is expecting the worst environmental disaster, precisely in terms of air pollution per unit time, second only to the Chernobyl nuclear accident. Explosions of bombs and shells, let alone ballistic missiles, cause devastating environmental effects, destroying flora and fauna, releasing heavy metals and toxic chemicals on the soil and in the atmosphere and making big territories inhabitable. They also threaten to cause a nuclear power disaster, if one of the 15 nuclear reactors in Ukraine is hit by missiles. Overall, the current environmental situation in Ukraine is evaluated as close to catastrophic, with more than 200 cases of ecocide already recorded. To eliminate the environmental harm will take years if not decades, considering the efforts needed to clear fields, forests and waterways of mines.

At the same time, there is no international justice mechanism to address accelerating climate change through acts of war and to make aggressor states liable for war-driven GHG emissions. But speaking about the environmental damages in general, remedies could be sought through the Hague-based International Criminal Court, whose prosecutor has authority to bring charges for wide-spread, long-term and severe environmental damage in the course of his investigation into alleged war crimes.

The growing concern over considerable military contributions to GHG emissions  since the beginning of the Russian invasion of Ukraine requires focus on addressing the climate impacts of military conflicts by creating climate-related legal, financial as well as military disincentives for waging war. But the problem is that GHG emissions from military activities, which are among the most emission-intensive, are not reported even in peaceful times. There has been a positive development though. NATO has recently claimed to focus on monitoring and reducing the carbon emissions of its own military forces, pointing out that while deploying its forces to deter and defend against Russia, the alliance must move energy security higher up its agenda and integrate climate change and energy security concerns with its military operational priorities more coherently.

Today, an urgent policy response aimed at shaping the climate change agenda with respect to the new challenges in the energy sector is required. In the current circumstances, when the dual crisis of climate and security is demanding a quick response, phasing out fossil fuels should be the number one priority. The rebalancing in policy priorities from the green transformation towards the search for solutions to the energy security problems might be temporary but risks undermining efforts to contain climate change. There is definitely no time to delay action on climate change. According to the recent Sixth Assessment Report of the Intergovernmental Panel on Climate Change, the urgent phase-out of fossil fuels is particularly required in the energy sector, to have a chance at keeping the global average temperature rise to 1.5 or 2°C (Summary for Policymakers, section C1). Otherwise, GHG emissions will continue rising beyond 2025, causing a median global warming of 3.2°C by 2100 that will be catastrophic for the planet. It is therefore in the interest of all countries, irrespective of their geopolitical positions, to prioritize the process of shifting to clean energy, developing structural energy efficiency, as well as introducing incentives for domestic and industrial energy savings and citizen responsibility in order to ensure global energy security and success in fighting climate change.

Photo by Romeo Varga on Unsplash