Taking Stock of the Stocktake: Reflections from the Bonn Technical Dialogue  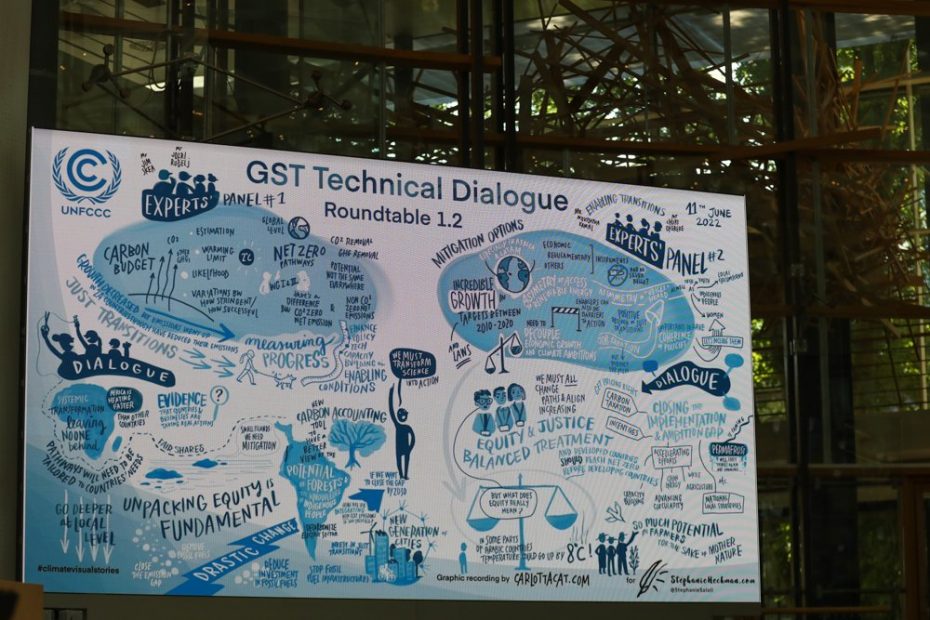 From 6-16 June, government officials and other delegates, including experts, non-governmental organisations, business representatives, and other non-state actors met in Germany for the annual UN Bonn Climate Change Conference. High on the agenda was the first meeting of the Technical Dialogue for the first Global Stocktake. Nicola Sharman and Harro van Asselt explain the important role of the Global Stocktake, what took place in Bonn, and reflect on how the process could be improved going forward.

The Global Stocktake (GST) is a cornerstone of the Paris Agreement’s ambition mechanism. It is the process whereby, every five years, the collective progress towards meeting the Agreement’s long-term goals will be assessed, in light of equity considerations and informed by the best available science. Each GST is intended to inform subsequent rounds of Nationally Determined Contributions (NDCs) and international cooperation, and encourage scaled up ambition to bring climate action in line with global objectives. The first GST, a significant milestone, is due to be completed in 2023.

In 2019, at COP24 in Katowice, it was agreed that the GST would consist of three components: (1) information gathering and preparation, (2) technical assessment, and (3) high-level consideration of outputs, with the chairs of the Subsidiary Bodies to develop guiding questions for each component. It was also agreed that Parties would engage in a Technical Dialogue as part of the second component to facilitate the exchange of relevant information and views.

The session in Bonn marked the first of three assigned meetings of the Technical Dialogue, co-facilitated by Harald Winkler of South Africa and Farhan Akhtar of the United States. It was described as a ‘conversation’ among parties, experts, and non-party stakeholders, aiming to develop shared understandings, with a focus on how gaps can be bridged and identifying opportunities for action. Given that this was the first Technical Dialogue, the co-facilitators acknowledged that they were ‘learning by doing’, experimenting with formats, and adapting it where needed.

Book-ended by opening and closing plenary sessions, the Technical Dialogue meeting was formulated to consist of three roundtable sessions, as well as a World Café. The roundtables each focused on one of the three thematic areas of mitigation, adaptation, and means of implementation (i.e. financial, technological, and capacity-building support), with expert panels and focused discussions that reported back to the closing plenary. The World Café consisted of rapid expert presentations and interactive exchanges amongst delegates at a number of much smaller tables on various topics, around which the participants could rotate every 30 minutes.

One thing that the Technical Dialogue in Bonn underlined is the essential role that non-state actors have to play in the GST. Not only can the scientific community provide objective data on global progress being made towards climate objectives, but researchers, experts and non-governmental organisations can provide a wealth of expertise, information, and experience of climate change’s impacts on individuals and communities. Moreover, they can provide knowledge of the effect of government response measures and their own initiatives, demonstrating successes, best practices, lessons learned, and shortcomings, all of which can inform further climate action and inspire enhanced ambition. It is therefore essential that the process properly integrates non-state actors’ inputs in a meaningful and inclusive way.

The modalities for the GST decided in Katowice confirmed that the process would involve participation of non-party stakeholders, and that the Technical Dialogue would be ‘open, inclusive, transparent and facilitative’. Non-party stakeholders also had an opportunity to make submissions for the information gathering and preparation component, along with the parties. Otherwise, the particular role of non-state actors in the Technical Dialogue has been left ambiguous and is being fleshed out along the way.

In Bonn, participation in the Technical Dialogue roundtables was regulated to accommodate approximately 60 technical experts from national delegations and 45 non-party participants, while the discussions were broadcast virtually to additional observers. The World Café similarly accommodated both parties and non-state actors, and was an innovation departing from traditional formats. Initial feedback suggests that this World Café format was received positively, with reports that it ‘broke down barriers’ by getting government delegates, scientists, activists, and the private sector face-to-face.

The overall approach by the GST has, so far, therefore shown some promise in its engagement of parties and non-party stakeholders. But some matters remain unclear or unresolved and, in the spirit of the learning-by-doing approach promoted by the Technical Dialogue’s co-facilitators, there are plenty of lessons to be learned on how to improve the process. Here we offer five suggestions for strengthening the Technical Dialogue process.

First, despite the fact that the co-chairs of the Subsidiary Bodies had prepared, in consultation with parties, guiding questions for each dimension of the Technical Dialogue, the questions were underutilised, leaving the discussions relatively unstructured. Even though roundtable discussions were broken down in sub-topics, it proved hard for participants to stay focused on the issues raised in the topic descriptions, at times because discussions on one topic spilled over into the next. It would be useful for the co-facilitators to review which questions have been inadequately addressed in the first Technical Dialogue (including in the submitted inputs) to ensure that they are indeed covered at subsequent rounds.

Second, many participants delivered pre-prepared statements at the roundtables, some of which were unsuitably long and arguably unproductive for engaging in a true dialogue. This should be actively discouraged at subsequent sessions, perhaps with allotted time designated for interventions and reactions, as well as steering by the moderators of the roundtable discussion.

Third, discussions should be targeted at identifying highly promising climate action. Moreover, non-party stakeholders should be given ample opportunity to present their experiences, as the parties themselves may be inclined to provide only positive national examples of climate action. Consideration of barriers to ambition and implementation should also be meaningfully incorporated into discussions.

Fourth, ‘ask the expert’ opportunities outside of the formal UNFCCC process, structured either within each of the GST’s three thematic areas or on more specific topics, could be a useful way to further encourage knowledge exchange.

Finally, scheduling the Technical Dialogue during the meeting of the Subsidiary Bodies, while important negotiations on other UNFCCC agenda items were also taking place, meant that it was spread out over several days to minimise scheduling conflicts. This situation will likely be worse in COP27 in November in Sharm El-Sheikh, Egypt, which will have a more crowded agenda. In future, it would be worthwhile concentrating the Technical Dialogue to keep non-party stakeholders’ participation costs low. For example, the Local Government and Municipal Authorities Constituency suggested organising the next meeting over two intensive days prior to COP27, rather than holding it simultaneously.

We will need to wait and see whether any adjustments to the Technical Dialogue process will be made prior to the next meeting at COP27. In the meantime, parties and non-party stakeholders have been encouraged to continue their discussions in other forums and keep making submissions. It is clear by now that the GST will not face a dearth of inputs. What does require more thought, however, is how to organise the Technical Dialogue in such a way so as to consolidate the vast volumes of information and diverse perspectives, and thereby create a coherent picture that effectively can inform the third component of the GST – the high-level consideration of outputs – which will undoubtedly be the most political and contentious stage of the process.

Photo by IISD/ENB | Kiara Worth. An artistic representation of the discussions at one roundtable