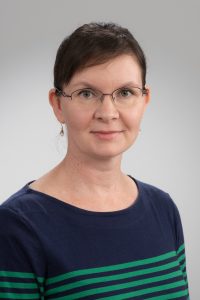 Maria Hytti, PhD Pharm, studied Pharmacy at the Ernst-Moritz Arndt University in Greifswald, from which she graduated in November 2011.

The practical work for her Diploma thesis entitled “The role of the tyrosinase gene in pigmented cells of the eye and brain” was performed at the Department of Biopharmacy of the University of Eastern Finland.

She returned to Finland and for her PhD research on “Inflammation in age-related macular degeneration and its regulation by Sirtuin ligands” and defended her PhD (Pharm) successfully in 2016. Her postdoctoral research focuses on the role of mitochondria in AMD and as potential treatment targets.

Niina Harju (Bhattarai), MSc, studied Biosciences with advanced studies in Biochemistry at the University of Eastern Finland and graduated in 2014.

She worked for couple of years in preclinical pharmaceutical research at Charles River before starting PhD studies in 2017. The topic of her PhD project is the regulation of inflammatory responses in retinal pigment epithelial cells.

Iswariyaraja Sridevi Gurubaran, MSc, has done his Master’s in Molecular biology at the University of Skövde, Sweden in 2012.

He wrote his thesis on “Phenotypic analysis of Crb2 knockdown in retinal explant and Crb2 conditional knockout (cKO) mice” at the Netherlands Institute for Neuroscience, the Netherlands. Later, he moved to the University of Copenhagen and started working as a research assistant at the Department of Neuroscience and Pharmacology. There, he investigated the impact of Müller glial cells on mitochondrial dynamics and how they contribute to the neuroprotection of ganglion cells in the pathogenesis of neurodegenerative glaucoma.

He joined the Immuno-Ophthalmology group in 2017 as a PhD student and has been studying oxidative stress and its impact on mitophagy (a selective form of autophagy) on the novel PGC1α/NRF2 double knockout mice model (Felszeghy et al., 2018), as well as inflammasome activation in vitro using the aggregation model of ARPE-19 (Piippo et al., 2014).

Currently she is finalizing her PhD project, which elucidates the molecular mechanisms of corneal disorders and age-related macular degeneration. Her research is focused on investigating inflammasome-dependent regulation of cytokine production upon failure of cellular homeostasis in human corneal and retinal pigment epithelial cells.

Apart from her doctoral project, Eveliina is working as a specializing clinical chemist at the Helsinki University Hospital.

Sofia Ranta-aho, MSc Pharm, graduated from the University of Eastern Finland in 2018. She prepared her MSc thesis in the Immuno-Ophthalmology research group about the regulation of NLRP3 in retinal pigment epithelial cells and continued a PhD project with the same title. Currently, Sofia has a temporary post at the community pharmacy.

Maija Toppila, MSc, studied Animal Biology and Biochemistry at the University of Eastern Finland from 2011 to 2016.

The practical part of her Master’s thesis “Mitochondrial DNA replication in cells suffering from nucleotide pool imbalances” was performed in the Mitochondrial biology research group at UEF (Joensuu campus).

After graduation she started her PhD studies in the Immuno-Ophthalmology research group (Kuopio campus).

The focus in her projects is on autophagy/mitophagy activation in retinal pigment epithelial cells.

Tommi Torsti, MSc Pharm, graduated from University of Eastern Finland in 2020. The practical part of his Master’s thesis concentrated on kinetics and mechanics of catechol-O-methyltransferase inhibition.

He has started his PhD studies in 2021. The focus of his project is to understand the progression of retinal and neuronal CNL3 pathology and to find leads to more common mechanisms of neurodegeneration.

Sanna Kuusisto, PhD, Laboratory technician, studied Biochemistry at the University of Oulu and graduated in 2014. Thereafter did her PhD in Medicine and worked a couple of years as a data scientist.