Tanja Tarvainen appointed as Professor of Computational Imaging and Modelling 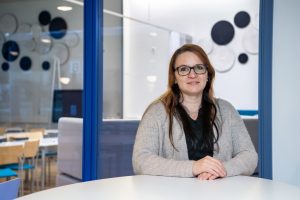 Tanja Tarvainen was appointed as a Professor of Computational Imaging and Modelling in the beginning of 2021. Imaging and modelling are part of inverse problems research that is the field of Professor Tarvainen. She is especially interested in Bayesian inverse problems, quantitative imaging, uncertainty quantification with applications in optical, ultrasonic and hybrid imaging. For more news: https://www.uef.fi/fi/artikkeli/tanja-tarvainen-laskennallisen-kuvantamisen-ja-mallinnuksen-professoriksi 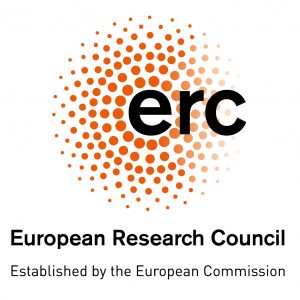 Associate Professor Tanja Tarvainen has been granted the European Research Council (ERC) Consolidator Grant for five years, with the funding amounting to 2 million euros. This is the first ERC Consolidator Grant awarded to a University of Eastern Finland researcher. The ERC grants are among the most esteemed European grants, making them highly competitive.

The grant was awarded for Associate Professor Tarvainen’s research aiming at developing novel quantitative imaging modalities based on coupled physics. Coupled physics imaging combines the benefits of two physical phenomena, such as light and ultrasound through the photoacoustic effect.

FM Jenni Tick was awarded the Finnish Inverse Prize for an excellent PhD thesis completed during 2019 at the annual Inverse Days conference in Jyväskylä, Finland. In her thesis “Image reconstruction and modelling of uncertainties in photoacoustic tomography” Jenni Tick approached photoacoustic tomography in a Bayesian framework, and formulated solutions for image reconstruction and uncertainty quantification of the inverse problem. Jenni Tick will publicly defend her thesis on December 20th in the University of Eastern Finland, Kuopio.

The Finnish Inverse Prize is awarded annually by the Finnish Inverse Problems society. The purpose of the prize is to recognize outstanding achievements in the field of inverse problems broadly defined, and to encourage future work in the field. The prize is most often awarded to a young researcher for an outstanding doctoral thesis in inverse problems. 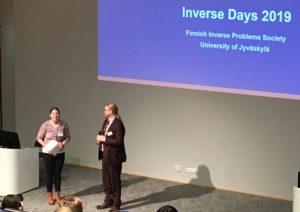 People in the figure are: Jenni Tick and Samuli Siltanen (President of the Finnish Inverse Problems Society).

The Finnish Centre of Excellence in Inverse Modelling and Imaging and Finnish Inverse Problems Society (FIPS) are organising a summer school on inverse problems on June 3-7, 2019 at the Kumpula Campus of University of Helsinki, Finland. The content is primarily intended for PhD students and postdoctoral researchers in mathematics or physics working in the field of inverse problems.

The first Finnish Workshop on Radiative Transfer was organised jointly by Finnish Meteorological Institute, University of Eastern Finland and University of Helsinki in Helsinki 6–7 May, 2019. National experts on computational modelling and theory of radiative transfer gathered together to present their research and exchange ideas on their work applied to the atmosphere, biomedical optics, vegetation, snow, and astronomical objects. The aim of the workshop was to connect Finnish researchers across scientific disciplines and to create a community for future collaboration in joint projects and enhanced researcher mobility.

“Advanced modelling framework and fast solutions are crucial in the quickly developing field of atmospheric remote sensing”, says Hannakaisa Lindqvist, organiser of the workshop at FMI-SPACE. “For example, new satellites produce increasing amounts of data that benefit from efficient algorithms,” Lindqvist describes the FMI interests in the workshop. Prof. Tanja Tarvainen, organiser of the workshop from the University of Eastern Finland, emphasizes the importance of collaboration: “We wanted to bring together radiative transfer researchers to advance collaboration and build networks especially for the young generation of researchers.” The workshop finished with a visit to the scattering laboratory at the University of Helsinki. “Measurements involving the scattering and absorption of light by complex media have tremendous value in giving the ground truth reference to our computational models,” concludes Antti Penttilä, workshop organiser from University of Helsinki.

An open source Monte Carlo software and MATLAB toolbox for light transport simulation was released by researchers of the University of Eastern Finland at the Department of Applied Physics. The software named ValoMC was developed by Aleksi Leino, Aki Pulkkinen and Tanja Tarvainen, and a related research article entitled “ValoMC: a Monte Carlo software and MATLAB toolbox for simulating light transport in biological tissue” was published in OSA Continuum. The software can be used to simulate light transport in a scattering medium such as biological tissue. Furthermore, it includes a MATLAB toolbox that can be used to analyse and visualise the simulations.

The Journal of the Acoustical Society of America (JASA) chose an article by Jenni Tick, Aki Pulkkinen, Jari Kaipio and Tanja Tarvainen from the Department of Applied Physics, University of Eastern as the latest Technical Area Pick for Biomedical Acoustics. The article entitled Three dimensional photoacoustic tomography in Bayesian framework was chosen among all the articles from the same technical field published in year 2018 in the Journal of the Acoustical Society of America. The article was co-authored by Felix Lucka from Centrum Wiskunde and Informatica (Amsterdam, the Netherlands) and Ben T. Cox, Robert Ellwood and Simon R. Arridge from the University College London (London, United Kingdom).

Centre of Excellence of Inverse Modelling and Imaging

The Academy of Finland has selected 12 new Centres of Excellence (CoEs). The first stage of the call attracted a total of 179 letters of intent, and 34 applicants were invited to the second call stage to submit full applications. The operating period of the new CoEs is longer than before, eight years (2018–2025), which according to the Academy of Finland will further serve to support scientific risk-taking.

Inverse problems research is a field of applied mathematics, which seeks to develop computational methods for medical tomography imaging, non-destructive testing, astronomy and environmental modelling. The UEF Inverse Problems Group focuses on modelling-related uncertainties in particular, as well as on applications in the fields of medicine and sufficiency of natural resources.
The research group is also strong in technology transfer, as the group’s researchers have established several companies, such as Numcore, Rocsole, Kuava and Ownsurround in the Kuopio region, and they have also won several national and international prizes. 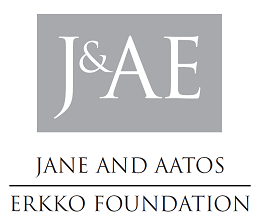 Danny Smyl from North Carolina State University (NCSU), Raleigh, USA, was awarded a Fulbright U.S. Student Award to Finland from August 2016 to May 2017. The Fulbright funded visit will be hosted by the Inverse Problems group at the Department of Applied Physics, University of Eastern Finland (UEF). Mr. Smyl is currently conducting his PhD work under supervision of Prof. Mohammad Pour-Ghaz, NCSU, on non-destructive testing of concrete. The visit is part of the research collaboration between the research teams of Prof. Pour-Ghaz and Dr. Aku Seppänen, UEF.

Academy funding for a project on remote sensing

Docent Aku Seppänen has been awarded a grant of 177 000 euros by the Academy of Finland to launch a new research project “Four-dimensional Airborne Laser Scanning”. The project is part of a research consortium led by Associate Professor Petteri Packalen from the School of Forest Sciences, University of Eastern Finland. The grant was awarded from Academy’s ICT2023 programme (third thematic call “Methods and applications for management and analysis of big data and open data”) for years 2016-2017..

Acoustic days 2015 is organized in Kuopio Music Center at September 1-2, 2015. The days are organized by The Acoustical Society of Finland.

A special issue in Inverse Problems

Editorial in Journal of Nuclear Cardiology 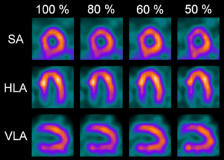 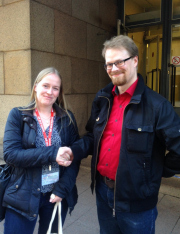 Academy of Finland granted Postdoctoral Researcher posts to Christina Brandt and Aki Pulkkinen. Both projects will start in September 1, 2015. Christina Brandt received her PhD from the University of Bremen in 2012, and has worked as a Postdoctoral researcher in the University of Osnabrück, Germany, since 2013. The topic of her Academy postdoctoral project is “Approximation error modeling in large scale inverse problems in imaging”. Aki Pulkkinen defended his PhD thesis in the University of Eastern Finland in August 2014. He visited the Sunnybrook Research Institute in Toronto, Canada during 2008-2011, and continued his research in the Kuopio Inverse Problems group 2012-2014. The topic of his Academy postdoctoral project is “Quantitative treatment planning for transcranial focused ultrasound therapy”.

Highligths of 2014 in Inverse Problems Journal

The Acoustical Society of Finland will organize Acoustic days in Kuopio, September 1-2, 2015. 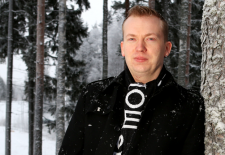 Timo Lähivaara was interviewed in CSC – IT Center For Science. Lähivaara has developed methods for mapping and monitoring groundwater reserves.

Marko Vauhkonen, PhD, was appointed to the position of the professor in industrial physics and mathematics in the University of Eastern Finland. Prof. Vauhonen is the leader of the Mathematical Modelling group in the Department of Applied Physics.

Tanja Tarvainen was awarded a 60 000 € grant by Magnus Ehrnrooth Foundation for research on quantitative photoacoustic tomography. In the project, Tarvainen’s research team develops modelling and image reconstruction methods for quantitative photoacoustic tomography based on Bayesian approach for ill-posed inverse problems.
In 2014, Magnus Ehrnrooth Foundation awarded 202 grants amounting to 1 741 875 €. The grant received by Tanja Tarvainen was the largest grant awarded in 2014. 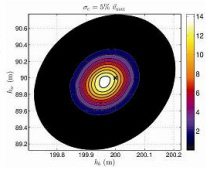 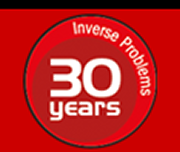 Inverse Problems is celebrating 30 years since the start of the journal’s regular publication in 1985. The journal has listed its top 30 cited articles. The article by Kaipio et al. 2000 is among those: 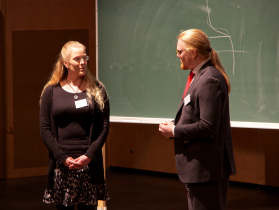 The Finnish Inverse Problems Society awarded Kati Niinimäki, Ph.D. with Pertti Lindfors prize for her work and achievements in the field of computational optimization methods for large-scale inverse problems. The award was granted to Kati Niinimäki in the annual Inverse Days in Inari, in December 12th, 2013. 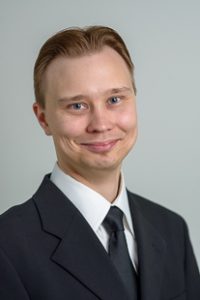 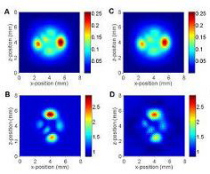 Anssi Lehikoinen selected as the Young Researcher Entrepreneur of 2013

Anssi Lehikoinen, PhD, was selected as the Young researcher Entrepreneur of the Year 2013. This is a new entrepreneurial award which purpose is to acknowledge researches who have developed business from research. The award was granted by the Federation of Finnish Enterprises and the Special Fund for Academic Entrepreneurship of KAUTE Foundation. Lehikoinen is the CEO of Rocsole Ltd and he defended his doctoral dissertation “Modeling Uncertainties in Process Tomography and Hydrogeophysics” succesfully in November 2012. The recipients of the Young Researcher Entrepreneur Award were announced on 20 May in Turku, Finland.

Aku Seppänen, PhD, was appointed as an Academy Research Fellow by the Research Council for Natural Sciences and Engineering of the Academy of Finland at May 8th 2013. In his research Aku Seppänen develops advanced modelling and inversion method for non-destructive material testing using various techniques which include e.g. electrical impedance tomography.

Anssi Lehikoinen selected as a promising young researcher in UEF 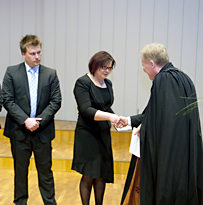 Anssi Lehikoinen, PhD, was selected as a promising young researcher in the Faculty of Science and Forestry in University of Eastern Finland by Rector Perttu Vartiainen and Academic Rector Jukka Mönkkönen. The award is presented in recognition of an outstanding doctoral dissertation completed at the end of the early stage researcher career phase. Lehikoinen defended his PhD thesis “Modeling Uncertainties in Process Tomography and Hydrogeophysics” succesfully in November 2012. The recipients of the Young Researcher Award were announced during the university’s anniversary celebration held on 21 March.

Highligths of 2012 in Inverse Problems Journal