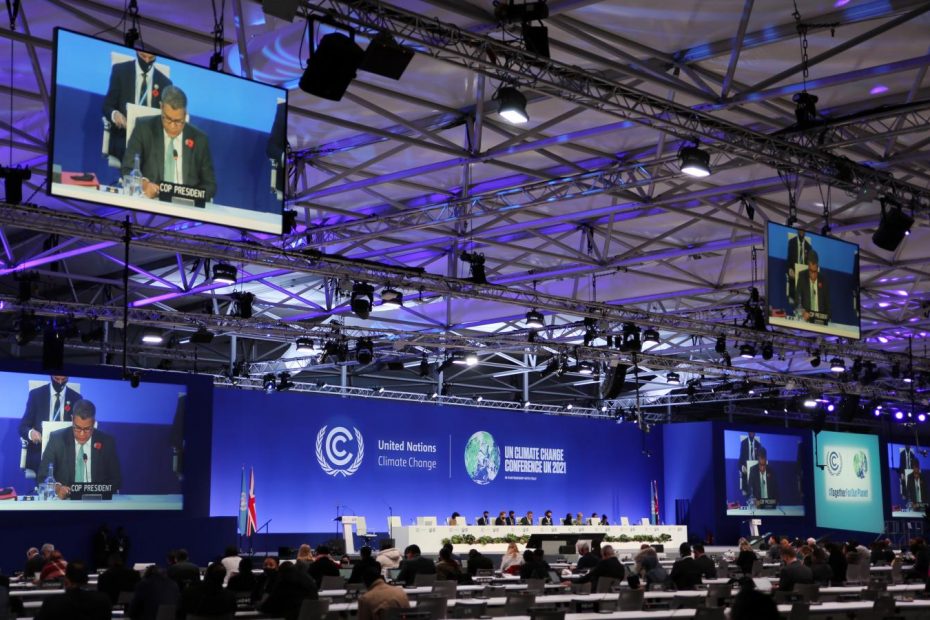 By Dr. Harro van Asselt, Professor of Climate Law and Policy. First published in the EJIL:Talk! blog on 26 November 2021.

For nearly 30 years, the international legal regime addressing climate change has kept largely silent about the major driver of the problem it seeks to address: fossil fuels. The Glasgow Climate Change Conference (COP26) that concluded last week has broken this taboo by including, for the first time, references to the phasing out of fossil fuel subsidies and the phasing down of coal power. How should these references be understood, and how significant are they?

The “F-word” of the International Climate Regime

The burning of fossil fuels – including coal, gas and oil – was responsible for 86% of carbon dioxide emissions in the past 10 years. One might expect that this basic fact would lead an intergovernmental process designed to tackle climate change to acknowledge this major driver, and to discuss ways of reducing fossil fuel production and use. One would be wrong.

Fossil fuels hardly feature in the climate treaties. The 1992 UN Framework Convention on Climate Change (UNFCCC) includes a few passing references to fossil fuels, mainly to acknowledge the plight of countries dependent on fossil fuel production, export and use. Where the Convention at least mentions fossil fuels, the 2015 Paris Agreement is completely silent about the main driver of climate change.

The reasons for these omissions are clear. Some countries, such as Saudi Arabia, have consistently argued that the UNFCCC should not be considered an energy treaty, and that the response to climate change should not target any emissions source in particular. Moreover, the climate treaties never mandated the adoption of specific laws and policies to address climate change, leaving the choice up to Parties.

The End of the Fossil Fuel Era?

While the international climate regime may have failed to directly target fossil fuels, elsewhere the ground is shifting. Countries like Germany and the Netherlands have begun to phase out the use of coal in their power generation, and at COP26 a group of developed and developing countries agreed on a transition away from ‘unabated’ coal-fired power (i.e. coal plants that don’t use technologies like carbon capture and storage).

Some governments have also adopted measures to restrict fossil fuel production, for instance refusing to grant new licenses for oil and gas exploration. At COP26, two such governments – Costa Rica and Denmark – broke new ground by launching the Beyond Oil and Gas Alliance, aimed at aligning oil and gas production with the Paris Agreement’s aspirational goal to keep global warming below 1.5°C.

Fossil fuels are also the target of lawsuits, from litigation targeting the permitting of individual coal mines to strategic claims challenging the overall climate ambition of multinational companies like Royal Dutch Shell. Outside the boardrooms and courtrooms, fossil fuels are the focus of pipeline protests and other forms of civil society resistance.

Including Fossil Fuels in a COP Decision

It is against this backdrop that the references to fossil fuel subsidies and coal emerged in Glasgow. The relevant paragraph of the COP decision

‘[c]alls upon Parties to accelerate the development, deployment and dissemination of technologies, and the adoption of policies, to transition towards low-emission energy systems, including by rapidly scaling up the deployment of clean power generation and energy efficiency measures, including accelerating efforts towards the phasedown of unabated coal power and phase-out of inefficient fossil fuel subsidies, while providing targeted support to the poorest and most vulnerable in line with national circumstances and recognizing the need for support towards a just transition’ (emphasis added).

By contrast, an early draft put forward by the United Kingdom (UK) COP Presidency much more succinctly called upon Parties ‘to accelerate the phasing-out of coal and subsidies for fossil fuels’. In the last days of COP26, this initial language was altered in several respects.

Second, the emphasis shifted from coal in general to unabated coal-fired power. This language is in line with initiatives such as the Powering Past Coal Alliance as well as the October 2021 G20 Leaders’ Declaration, but the emphasis on coal consumption by the power sector diverts attention from coal-mining countries such as Australia. Moreover, the focus on unabated coal-fired power suggests that some coal-fired power plants could still move ahead. However, it can also be argued that without carbon capture and storage no new coal power is possible.

Third, the paragraph came to include a reference to ‘the need for support towards a just transition’. This addition was essential to gain support from developing countries such as South Africa, which had earlier in the week concluded a deal under which the United States, UK and EU agreed to support the country in a just transition away from coal.

Fourth and perhaps most controversially, the term ‘phase-out’ was changed into ‘phasedown’ for unabated coal, following discussions between China, India and the United States. Whereas a phase-out is explicit about the ultimate goal (i.e. no more coal power), a phasedown merely suggests a gradual reduction in coal use. The last-minute nature of this change upset several countries that had been told earlier by the UK Presidency that the decision could no longer be changed, causing the UK COP President Alok Sharma to issue an emotional apology. Less controversially, India also insisted on language to accommodate subsidies to support the poorest and most vulnerable.

Why the References to Fossil Fuel Subsidies and Coal Matter

The end result is clearly a watered-down version of the original proposal. In addition, even if the COP decision would be binding – and such decisions only exceptionally are – the phrasing is hortatory (‘calls upon’) and indirect (‘accelerating efforts towards’), and no time frame or deadline is specified. Moreover, while coal was spotlighted, oil and gas were conspicuously left out. Still, the decision is significant for several reasons.

First, the decision marks the first time that a decision agreed upon by all Parties mentions fossil fuels and coal as part of the climate problem and as something that requires action from Parties. This recognition may be 30 years overdue, but it’s a major symbolic step.

Second and likewise, removing fossil fuel subsidies is for the first time presented as a credible climate change mitigation measure. Moreover, notwithstanding its lack of precision, the decision eschews the vague language of ‘rationalising’ fossil fuel subsidies used in Target 12.c of the UN Sustainable Development Goals.

Third, COP decisions are commonly referred back to in future work. Although they don’t have strict precedential value (after all, they can be overturned by a subsequent COP decision), the careful way in which their language is negotiated means that they often form a baseline for future decisions. For example, the 1.5°C goal went from a non-committal reference in the 2009 Copenhagen Accord to an aspirational goal in the Paris Agreement. Countries will likely keep fossil fuel subsidies and the coal phasedown on the agenda in the coming years, thereby maintaining pressure on countries to act.

Fourth, rather than weakening the text, the link to the notion of a ‘just transition’ and the exception of targeted support for the poorest and most vulnerable are essential for developing countries such as India and South Africa, which still face massive challenges in their transition away from fossil fuels. The inclusion of these phrases signals that the challenges of phasing out fossil fuel subsidies and moving away from coal are not the same for all countries, and that some countries require support in the process.

While a COP decision as such won’t change this equation, it offers a foundation to strengthen the UNFCCC’s influence over time by empowering domestic constituencies in favour of a fossil fuel phase-out to point to an international commitment adopted by all governments, by enabling the sharing of knowledge and experience between stakeholders in different countries, and by offering the opportunity to seek financial support for a transition away from fossil fuels.

The impact of the COP decision in each country will likely vary, but the end goal is crystallising: to avert climate disruption, fossil fuels will need to be phased out in a fair and equitable manner.

Harro van Asselt is Professor of Climate Law and Policy the Centre for Climate Change, Energy and Environmental Law at the Law School of the University of Eastern Finland, a Visiting Researcher at Utrecht University’s Copernicus Institute of Sustainable Development, and an Associate with the Stockholm Environment Institute. He is also the editor of the Review of European, Comparative & International Environmental Law. His research is focused on interactions between climate change and international economic law, and the governance of fossil fuels. He holds a PhD (with distinction) from the Vrije Universiteit Amsterdam.