This week’s blog post will take you to two marteloscopes. Do you know what that is? Any guesses? We take a definition from a technical paper published by the EFI (Schuck et at., 2015):

”Marteloscopes are 1-hectare large, rectangular forest sites where all trees are numbered, mapped and recorded. In combination with a software tool, they are used for silvicultural training.”

The MSc European Forestry students Rayhanur Rahman and Lucas Moura de Abreu visited two marteloscopes near Freiburg during the course “Close-to-nature forest management”, offered by the Albert-Ludwigs-Universität Freiburg, one of the universities of the MSc EF consortium and where they are doing their second year of the programme.

Now, we will take you through a visit to these sites. We hope you have a good time and a glimpse of some forest types around Freiburg!

The first marteloscope is located in Mooswald, a public forest that belongs to the city of Freiburg and is located along the west side of the city. It’s a flat area with a shallow water table, at an elevation of around 230 m.a.s.l. 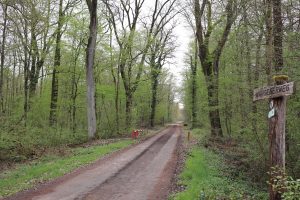 The main species in the marteloscope are the common oak (Quercus robur L.), red oak (Quercus rubra L.), black cherry (Prunus serotina Ehrh.), European or common hornbeam (Carpinus betulus L.) and common or black alder (Alnus glutinosa (L.) Gaertn.). There are also less abundant species like the sycamore maple (Acer pseudoplatanus L.), of which you can see a detail of the leaves on the picture below: 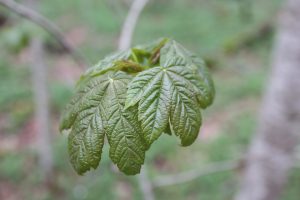 All the trees in the marteloscope above 7 cm dbh are numbered, as you can see below: 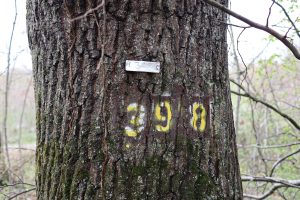 A tablet is the tool used to visualize the trees in the stand. Tree species are symbolized by different colors and dbh by the different circle sizes, as you can see in the picture below. With the map, a pretty good grasp of the spatial horizontal distribution of the trees can be easily obtained. If you select a tree, information is displayed with both its economic value (already accounting for harvesting, i.e., the price for which the forest owner would sell the wood at the road) and its ecological value, which is based on tree microhabitats (more details in the technical paper at the end of the post). 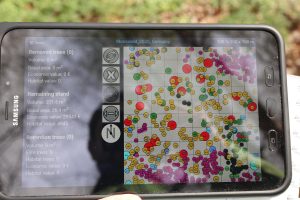 The overstory of this stand is mainly composed of common oak. Some of those trees have a stem with very high quality for veneer production. Others have damages from a wood production perspective (e.g. cavities, bark wounds, broken crown), which from a biodiversity perspective on the other hand create microhabitats and consequently a high habitat value (see pictures below for one example of each). Other trees can present both of those values at a high level – they are then called “conflict” trees and represent a trade-off between wood production and biodiversity goals. The decisions of harvesting or retaining each tree on the stand can be simulated on the tablet. Finally, a report is generated with the outcomes of the different simulated scenarios. 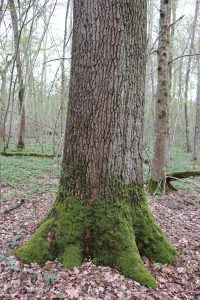 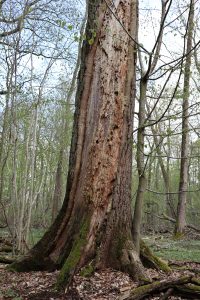 The second site is the Roßkopf marteloscope, located at an altitude of around 420 m.a.s.l. Located on a slope as opposed to the first area, the species composition also differs greatly. Here, the stand is dominated by three species: European beech (Fagus sylvatica L.), silver fir (Abies alba Mill.) and Pseudostuga menziesii (Mirb.) Franco. 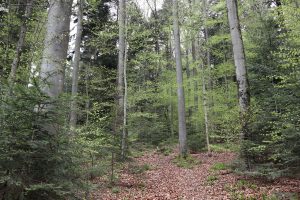 The regeneration is dominated by silver fir, as you can see in the picture below: 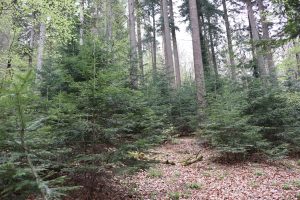 Despite its abundant regeneration, the site is considered not very suitable for silver fir, due to its relatively low elevation (the native range for the species would be above ~600 m.a.s.l.), which suffers very much from drought stress when it achieves older ages and larger diameters. In fact, many individuals fitting that description were found dead in the stand. The species can still be managed at this site, according to Dr. Thomas Asbeck, who supervised the visit, but measures such as using a smaller target diameter for the species (e.g. 45 – 50 cm) need to be adopted.

The species with highest economic value in the stand is Douglas-fir. The trees of this species are pruned in this site, with dbh achieving 105 cm and a tree value of €1,000 or more at the road side (see picture below). 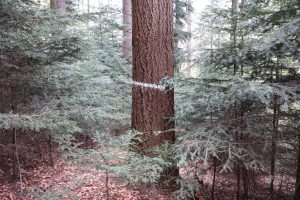 As a conclusion, the MSc EF students found marteloscopes a very useful tool for understanding and visualizing better the effects of silvicultural prescriptions on a stand.

Lucas Moura de Abreu is a forest engineer from Brazil. He’s doing his second year of the MSc EF in the University of Freiburg, Germany. You can reach him at lucas2708@gmail.com.

At the moment of writing this post the number of infections of coronavirus in Germany is rising again. The winter semester is coming to an end and most of it has been in lockdown.

Despite of this the students in Germany were able to experience first-hand some of the issues that were studied in the courses. For instance the University of Freiburg offers a course together with the Agro-Paris tech, other university of the consortium. The course is about the forest practices in France and Germany, with an special focus in the Black forest and the Vosgues (In the French side) the problems what are arise and how they are addressed. 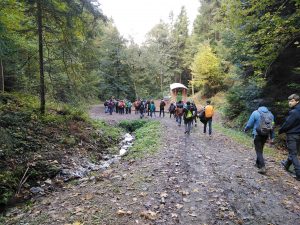 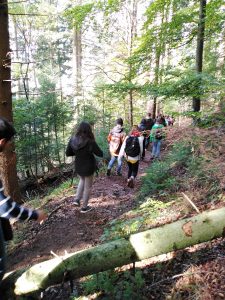 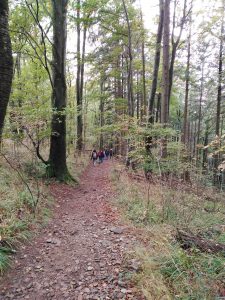 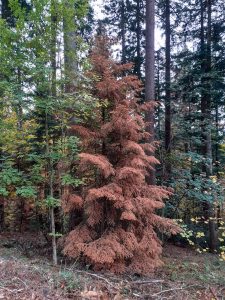 The Black Forest is a forested mountain range in Southwestern Germany, it covers around 600.000 Ha from which 65 % are forests.

As it is already known, a very actual issue that the Black forest faces is the climate change, these last years the droughts in central Europe became more frequent and more intense and the forest species struggle to adapt and in some cases they die, at the university of Freiburg silvicultural approaches to adapt forests to climate change are studied, among the the mixing of forest species and the use of better adapted provenances.

When hiking around the Black forests, which is all around Freiburg we were able to see by ourselves this situation, so we can learn forestry without the need of presencial classes.

It was my dream coming true when I first received the e-mail from our coordinator saying that I had been selected for the scholarship. Student life in Finland was a lot of fun for me. I was thinking how I could adapt to the new environment and study life specially in Europe. By being a resident of a Southern Asian country, it was not easy for me to merge with the new environment. But everything went well when I met with my classmates, teachers, coordinator, and tutor. We have students from 13 nationalities in our batch. They were always helpful whenever I needed them.

Joensuu is a place which comprises a lot of activities for students besides studying. Biking, ice skating, canoeing, swimming, outdoor camping, eating together etc. and we took every opportunity to do those whenever we got some leisure time. Below there are some pictures of our outdoor activities. 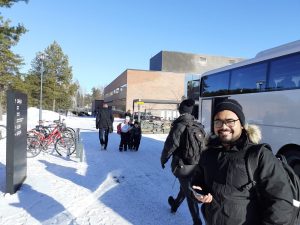 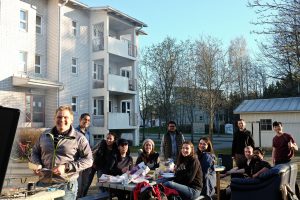 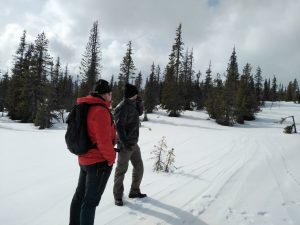 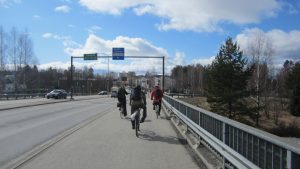 Despite the current pandemic situation, my Applied Period took place under the Chair of Forest Growth at Albert-Ludwigs-Universität Freiburg, Germany. I joined as a trainee in KonKlim Project which aims at the suitability of three most economically important coniferous tree species (Norway spruce, Silver fir and Douglas fir) regarding their growth increments to predict climatic changes in Black Forest.

My responsibilities were divided into two parts:

During my internship period I learned a lot about institutions, professionalism, office works and techniques, which I think will be lifelong lessons for me. Most importantly, I improved a lot of my interpersonal skills through regular interactions with professors, researchers, and staff from different sectors.

Regarding life apart from work, the Freiburg city is the great place to live, as there are plenty of options for outdoor activities.  In addition, I really enjoyed the sunny weather in Freiburg during the whole applied period.

Experiences shared by Md. Rayhanur Rahman from Bangladesh who is currently doing his second year of MSc EF in the Albert-Ludwigs-Universität Freiburg, Germany. Feel free to ask him any question at rayhanur.rahman@students.uni-freiburg.de