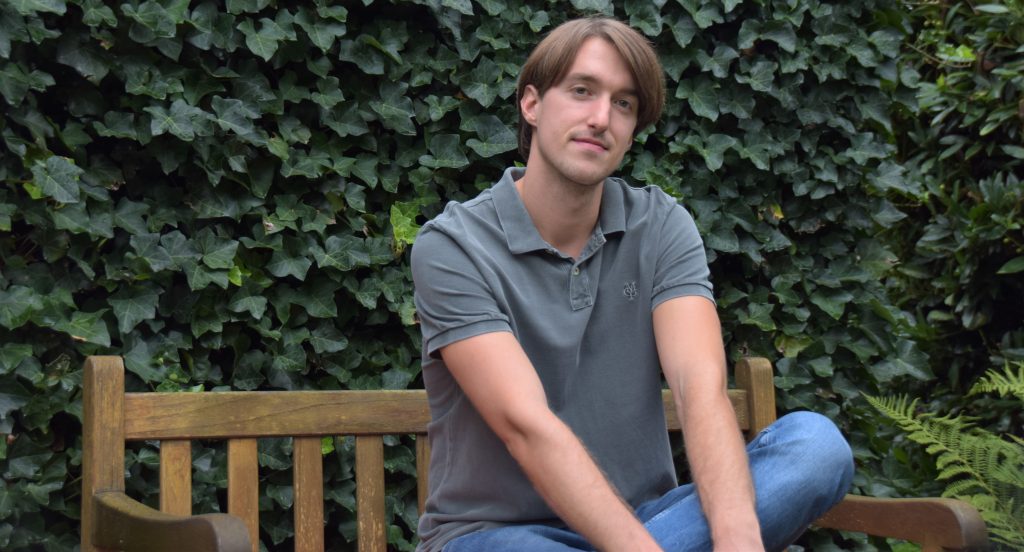 “I would truly recommend the programme for anyone who is open minded and wants to learn about different cultures, while gaining a solid academic foundation.”

Our alumnus Simon recently accepted a scientist position at a state research institute in Germany, briefly after graduation, so he sure has up-to-date knowledge on what potential employers think about the double degree from the Erasmus Mundus MSc programme in European Forestry and the knowledge he has accumulated during the studies. The role of forests in climatic changes has always been of particular interest to Simon, so he is happy to be contributing to just that: he will be involved in developing a national system to economically assess climate-change induced forest damages. Generally speaking, there are many places where his special area of expertise, forest policies and economics, can lead to a huge change for the better.

Simon grew up in a small town in the north of Bavaria, Germany, so he has always been surrounded by forests and pursuing a nature-oriented lifestyle ‒ chopping firewood, fishing and roaming the nature with their family dogs, while also learning about the regulatory side of the use of forest resources, as his uncle is a forest administrator in the state forest department. His interest towards forestry grew and grew, and finally led him to study a Bachelor’s degree in Forest Science and Ecology.

‒What fascinates me most about forestry is the social aspect and the way forests are governed in different parts of the world: how societies perceive and manage their forests and how national and international policies and legislations influence the usage of forest resources. Social, economical and ecological viewpoints become intertwined in forestry.

As an eager traveller, Simon wanted to take the Master’s degree as an opportunity to study abroad and to broaden his horizons in the multifaceted field of forestry.

‒Europe is such a diverse continent in terms of climate and cultures, so that was basically the main motivator for me to apply to the European Forestry programme. I come from the temperate zone, so I thought that it will be a perfect opportunity to “round up” the whole European experience from the mediterranean zone to the boreal forests of the North.

THE POWER OF FOREST POLICIES

The first leg of the mobile European Forestry programme was a 10-month period at the University of Eastern Finland, where the whole group met for the first time.

‒I had seen a little bit of Finland on my travels before, so I was really excited to experience the “true North” in more detail. I remember well the first kick-off excursion of the programme in August, when we went to the Ruunaa rapids in the very eastern part of Finland, took a boat trip in the roaring rapids and finally had a sauna and swim with other fellow students. We were 18 students from 11 different countries, so it was a really nice way of getting to know each other and, quite literally, “warm up” in the sauna. A really nice Finnish welcome, I would say!

During the EF studies, students choose their orientation according to their ambitions.

‒The programme gives students the opportunity to specialise in, for example, remote sensing or forest IT, while others like myself are more drawn to forest policies and economics. It’s important that you can focus on what motivates you the most. Personally, I think it is interesting to study how forest policies can be adjusted to promote a more sustainable use of natural resources and how a small change in these policies can have a massive impact.

Even though the programme is called European Forestry, the viewpoint is global, because European policies have further-reaching impacts than you first think.

‒European policies influence largely how forest resources are used globally. Illegally sourced tropical timber may find its way to Europe, for instance, so halting deforestation is “our problem” as much as “theirs”. European policies have the power to do both, contribute to the development overseas and on European level, and thus to strengthen the role of forests in climate change mitigation and adaptation.

Overall, Simon thinks that the EF programme offered him the academic tools that he needs to pursue a career in the field.

‒We got a nice overview of forestry as a science. From the first part at the UEF I would highlight research methodology that the UEF is very strong at. The most interesting course for me was Trends in European forestry that was a very nice introduction on what’s going on in different parts of the continent. We also had numerous visiting scholars from outside of Europe so the global aspect was always there.

In such an international study group, the ability to work together with colleagues from all over the world comes naturally ‒ along with the opportunity to have intriguing discussions about the course topics.

‒There were many Brazilian students in the programme, for example, so it was interesting to discuss with them and hear how they perceive the forestry traditions in their country, how slash-and-burn agriculture has been such a common practice there, while other people perceive forests in a very different way. When you listen to the hands-on experiences of the local people, you get a wider perspective than just from reading the news.

At the time of the interview, Simon is looking back to his studies with fresh-from-the-press degree diplomas in his hands, one from the University of Eastern Finland and one from the University of Lleida that he chose as his host university for the second academic year. According to Simon, having two diplomas from an internationally-recognized programme definitely caught the attention at job interviews that he recently took.

–I just accepted a position as a scientist at the Thünen-Institute for International Forestry and Forest Economics in Hamburg. I’m glad that the job search with the EF degrees turned out successful pretty soon after graduation.

Before moving to Spain, he went through an experience that many students of the group mention as their number 1 highlight of the programme.

‒I think most fellow students would agree that the month-long excursion to all of the universities in the consortium was something extraordinary. We got to see nature, such as the untouched forests in the Carpatian mountains, and all the universities were presenting their top most interesting things. Although I have to say that it was quite rough to start my internship straight after the incredibly amazing but exhausting trip, Simon laughs.

The extremes of Europe realised also during the first part in Finland.

‒When I was in Finland, I was lucky to experience a “real” winter. It was fun to experience the temperature going down to ‒25 because it never happens in Germany. We were eager to explore new winter activities and I tried cross-country skiing, for instance, for the first time. You can rent skis and go on the track right in the city center.

Regardless of the weather, Simon thinks of Finland as one of the best places to study forestry in.

‒It was great to see the nice bond between forest and people, the kind of respect that people have towards forests. Maybe it’s because the forest industry has been such an important sector in the country in the course of history and a lot of the well-being is built on the use of forests. There are also a lot of globally operating companies who promote the use of forest resources in a new, innovative way.

Simon doesn’t hesitate when asked whether he would recommend the programme for future students.

‒I would truly recommend the programme for anyone who is open minded and wants to learn about different cultures, while gaining a solid academic foundation. I’m still in touch with several fellow students and we are planning to arrange a meet-up when the Covid-19 situation ceases. Thanks to the programme, I have a home in many countries.