Observer participation in the wake of COP26: the role of human rights law 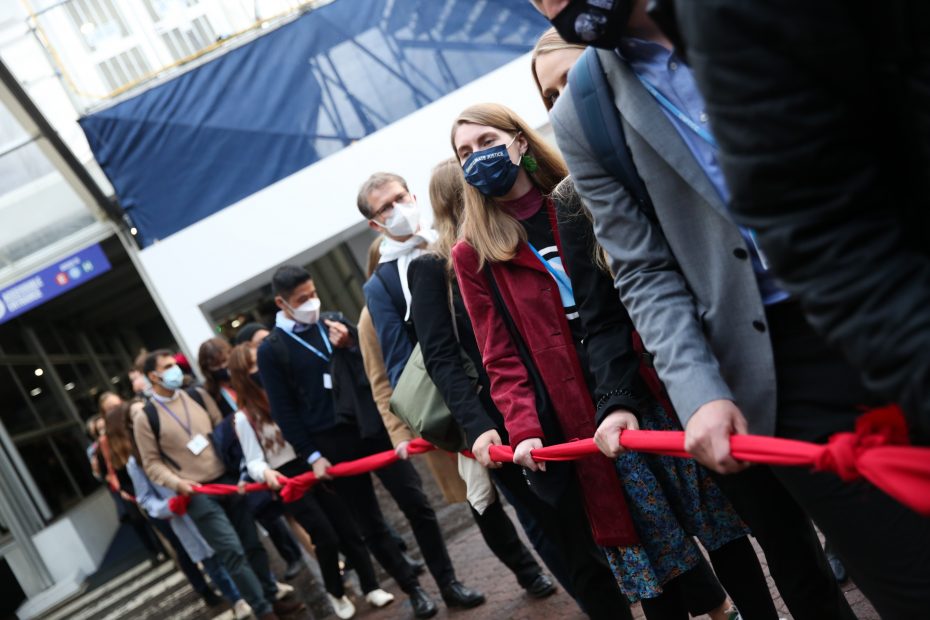 By Nicola Sharman, PhD Researcher. The blog text was originally published on the GNHRE blog as part of COP26 Blog Series on 30 November 2021 and on the 2035Legitimacy blog on 7 December 2021.

In the months leading up to COP26, the UK presidency repeatedly committed to make it the ‘most inclusive COP ever’. Yet this promise of inclusivity was far from delivered. Lack of representation of those most affected by climate change and exclusion of observers from negotiation rooms led many civil society groups to call into question the legitimacy of the conference and its outcomes. Here, I reflect on the role of observers in the climate summits and the value of concentrating on rights-based approaches to observer participation in the UNFCCC.

All eyes on COP26

The need to engage civil society in international climate policymaking was brought sharply into focus at COP26 amidst unprecedented levels of public awareness and civil society demonstrations. A significant step up in the ambition of mitigation commitments was needed to keep the Paris Agreement’s 1.5 degree temperature goal within reach, while demands for increased support and compensation to be delivered to those on the frontlines of the crisis have intensified. The governmental decisions and commitments (or lack thereof) that would be made at COP26 would have important and direct significance for individuals and communities around the world.

The need for civil society voices in UNFCCC summits

The cross-cutting nature of the climate crisis deeply accentuates the need for civil society voices to be present within the UNFCCC summits. Public participation allows a diverse spectrum of perspectives to be brought to the table, helping shape better and more equitable solutions. It underpins government accountability and legitimises the process. But at a more fundamental level, affected citizens have the democratic right to be involved in the decisions that affect their lives.

Participation as a general principle is indeed widely endorsed in international environmental law, as enshrined in Principle 10 of the Rio Declaration, which states that ‘environmental issues are best handled with the participation of all concerned citizens’.

The UNFCCC, like other intergovernmental treaty processes, facilitates public participation primarily through the allocation of observer passes. Non-party stakeholders apply for accreditation under the umbrella of one of the nine constituency groups representing different interests (youth, indigenous peoples, environmental NGOs, business, farmers etc.). Being granted observer status carries with it the opportunity (albeit limited) to sit in open negotiations, make interventions and engage with government representatives through various side events held during the conference.

This year, a record number of almost 40,000 accreditations were granted and on the face of it, the high volume of accreditations seems positive. However, participation becomes meaningless or even counterproductive if it isn’t representative and genuinely inclusive.

COP26 was described as ‘the whitest and most privileged ever’ due to the barriers that representatives from the Global South, compounded by the pandemic and lack of support measures, faced in making the journey to Glasgow. Those who did make it were still faced with multi-layered access issues. Entry to the venue itself was not guaranteed due to a 10,000-person capacity limit. The online platform designed to enable virtual viewing of proceedings was plagued by technical issues, and observer access to negotiation rooms was limited by a ticketing system which usually permitted entry to only one person per constituency.

The response to these restrictions was one of frustration and anger, with many observers staging a walkout towards the end of the talks. Those most vulnerable to climate change, the young and indigenous groups felt particularly excluded from having a meaningful seat at the table. As a result, the legitimacy of the conference and its outcomes was called into question.

Enabling representative, equitable and meaningful participation at the international level is admittedly difficult given issues of sheer scale. However, this doesn’t mean that such values should not be strived for to the greatest possible extent. Explanations attributed to the pandemic did little to convince many observers that adequate efforts were made by the UNFCCC secretariat or the UK presidency in Glasgow.

The challenge with existing environmental and climate change law is that it remains underdeveloped in terms of putting the principle of participation in a democratic framing or defining benchmarks for how it should be implemented at an international level.

By contrast, human rights law may have far more to offer in promoting rights-based approaches to participation in the climate summits.

In the preamble of the Paris Agreement, parties acknowledge that they should respect and promote their respective obligations on human rights. Meanwhile, strengthened linkages between climate change and substantive human rights, as demonstrated by the surge in rights-based climate litigation, is also laying stronger foundations upon which to develop the application of procedural human rights. This is exemplified by the Human Rights Council’s (HRC) resolution on 8 October earlier this year to recognise the human right to a safe, clean, healthy and sustainable environment. In the same resolution, the HRC recognised that effective participation in the conduct of governmental and public affairs was vital to the protection of this right.

Elsewhere, the right to participate in public affairs is already widely endorsed via Article 25 of the International Covenant on Civil and Political Rights, which states that ‘every citizen shall have the right and the opportunity… to take part in the conduct of public affairs, directly or through freely chosen representatives…’ This treaty has 173 parties – the vast majority of the UNFCCC parties – and the 2018 OHCHR Guidelines state that participation of civil society actors in meetings of international organisations should be proactively encouraged by states.

Finally, we also have two regional treaties – the Aarhus Convention (Europe and Central Asia) and the Escazú Agreement (Latin America and the Caribbean) – which frame public participation in environmental decision-making as a procedural environmental right. While these treaties have only regional membership and are primarily aimed at national levels, both oblige their members to promote public participation in international forums.

Human rights law thus identifies and defines civil society participation at the international level of decision-making as a human right. In order to give effect to a right of participation at all levels, democratic values of representation and inclusivity need to be incorporated by states into the participatory process.

By focusing on these rights-based legal underpinnings, pressure could be brought to bear on the UNFCCC parties to ensure that these democratic values are being strived for in the COP process. Moreover, reliance on human rights law may put additional tools at our disposal to hold states accountable for their efforts, whether through judicial forums or institutional mechanisms.

It is also relevant to note that the host country has particular power and responsibility at each summit for its logistical arrangements. In the case of COP26, therefore, the UK presidency’s membership of the Aarhus Convention becomes especially significant as a legal basis on which to challenge the UK’s role in the problems that transpired in Glasgow.

However, this also draws attention to the fact that not all parties to the UNFCCC are parties to human rights instruments. Some have raised concerns about the next two COPs in Egypt and the United Arab Emirates, given their hosts’ poor human rights records.

Nevertheless, COP26 has provided a powerful reminder that the quality of observer participation matters; otherwise legitimacy will suffer.

Human rights law can not only provide a stronger legal basis for scrutiny of the implementation of the existing system but could encourage reconsideration of the system itself, its limitations and how more democratic processes might be incorporated into international climate policymaking.