The group belongs to the Department of Physics and Mathematics and the Institute of Photonics. It is also a member of the Academy of Finland’s Flagship on Photonics Research and Innovation (PREIN).

Research on carbon materials at the Institute of Photonics is based on the unique methodology and facilities created at Department of Physics and Mathematics. Our research facilities allow us to produce thin film carbon materials with different structural characteristics and physical properties, including single and multilayered graphene with controlled grain size, graphene nano-walls, pyrolytic carbon, graphitized pyrolyzed photoresist (hot wall chemical vapor deposition, CVD), nanodiamond films and single crystal diamond needles, and graphene nano-scrolls (plasma enhanced CVD, PE CVD). Different pre- and post-treatment methods are developed to obtain materials with prescribed morphological and physical properties. The developed at our laboratory technology, which is based on the combination of the PE CVD with thermal oxidation, enables scalable fabrication of unique single crystal diamonds having needle-like shape that are currently attracting a lot of attention in quantum research. 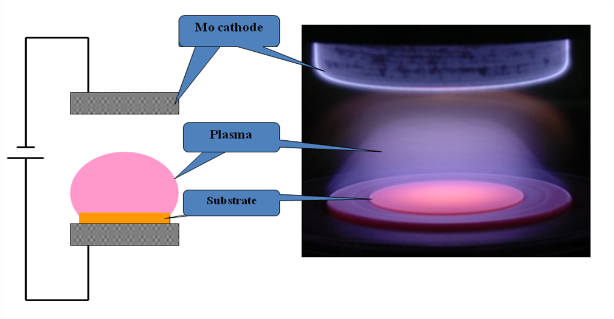 Photograph of the PE CVD system at Department of Physics and Mathematics UEF. 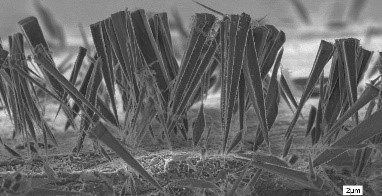 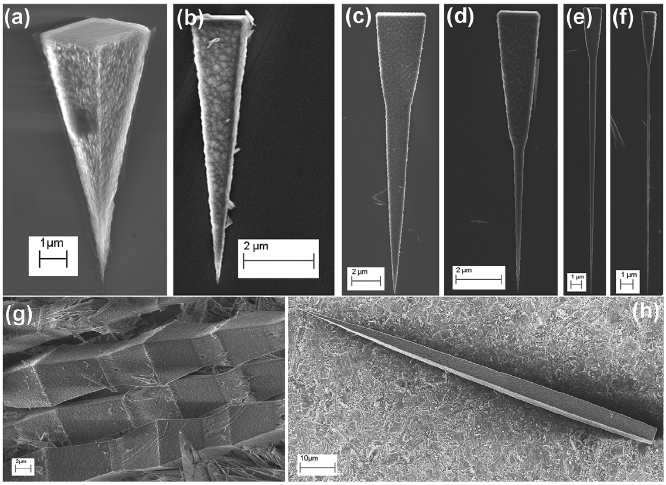 Scheme of growth and SEM image of the carbon nanotube forest on Si porous substrate.

SEM image and scheme of the carbon nano-scrolls having polygonal cross-section.

One can have remarkable control of the surface properties by patterning it to contain micro- and nanometer sized structures. In a femtosecond laser ablation those structures are produced with an very short laser pulses that enables precise controlled way to modify the surface topology.

With small structures one can control various functionalities including reflection of light, hydrophobicity, oleophobicity, and even the growth of biological material on the surface. Each functionality requires its own surface structure and proper chemical properties of the surface material. The femtosecond laser provides enough energy in each light pulse so that practically any material from stainless steel to biological tissues can be ablated.

Our team has developed the efficiency of the ablation process by introducing various ways to control the laser beam. These include, e.g., interferometric pattern in ablation and array of beams constructed with diffractive gratings. Also, we have worked successfully in the replication of the structures onto polymer surfaces.

More information about the research

When laser light is packed to 100 femtosecond of duration the optical power equals power of 30 modern nuclear power plants. When focused down to a micrometer scale focal point the irradiance in the focus becomes trillions times higher than in the core of the Sun where temperature reach 20 million Centigrades.

Pulses of this kind can deform any materials by technology called laser ablation. Though the energy densities of the pulses are enormous the total energy is so low that the pulses do not remarkably heat the sample. With focused pulses a micrometer scale holes can be produced and the material fallen away may form a new types of nanostructures. A surface of this kind may be, e.g., water and dirt repellent and antireflective.

In our femtosecond laboratory many kind of surface materials with various chmical and physical properties can be fabricated. Femtosecond pulses can be also used in production of nanoparticles and in studies of material properties. Also, latest theories on nonstationary optical coherence can be evaluated with ultrashort laser pulses in practice. 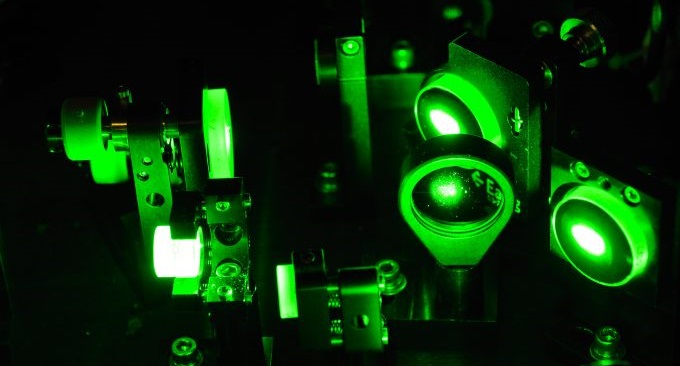 Laboratory
Chemistry laboratories are located at the Futura building (UEF, Joensuu campus). The infrastructure includes, for example, the following devices:

Photocatalysis utilizes light to activate chemical reactions. The most studied photocatalytic material is titanium dioxide (TiO2), which is a widely used white, inert, and non-toxic pigment and semiconductor. The bandgap of TiO2 is 3.2 eV corresponding to the UVA-range that is only approximately 3-5% of the solar spectrum. Therefore, recent research has focused on functionalization of TiO2 structures, for example, with metal nanoparticles that can couple visible light wavelengths for the photocatalytic excitation via plasmonic coupling. This can significantly improve the efficiency of such metal-semiconductor composites.

Laboratory
The photocatalysis laboratory is located at the Futura Building in the UEF Joensuu campus. The laboratory is equipped with novel gas-phase photocatalytic activity characterization tools and possibilities for various synthesis routes for multicompound and multilayer inverse opal semiconductor structures. The infrastructure includes measuring, imaging and manufacturing devices, for example:

Group members
An automatically updated list of personnel can be found from the group UEF Connect website.

Publications
Our recent publications can be found from the group UEF Connect website.

The computer clusters are combined into a grid of computer clusters situated at different locations around Finland (The Finnish Grid and Cloud Infrastructure, https://research.csc.fi/fgci). The joint resources are part of the cPouta cloud.

We focus on using color centers in diamonds for quantum sensing and imaging. Nitrogen-vacancy (NV) centers shown their suitability for magnetic, electric and mechanical strain fields sensing. Silicon-vacancy (SiV) and germanium-vacancy (GeV) centers proved an advantage in all-optical nanoscale thermometry. Small size and high sensitivity of the color centers in diamond allow advanced measurements with nanoscale spatial resolution. Moreover, combination of various color centers in one sensor can significantly increase its capability allowing simultaneous registration of different characteristics. For instance, magnetic field and temperature at the same point can be measured by a sensor containing NV and SiV (or GeV) centers. Such kind of measurements are particularly attractive for investigations of the dynamical systems including living cells and organisms. Scanning measurements with small-size diamond sensor may provide information about spatial distribution of investigated signals and, thus, allow mapping and imaging.

We are developing creation of luminescent centers directly in the course of the CVD diamond synthesis, which enables precise control of the synthesis via tuning of substrate temperature, gas mixture composition, pressure and gas activation rate. Diamond shape and size are other important factors and single crystal diamond needles (SCDNs) possess morphological characteristics doing them promising in quantum scanning sensors. Nanoscale thickness of the SCDN apex can provide close placement of sensing defect to analyzed object while its microscale base allows relatively simple manipulations during the sensor fabrication and use. The combining CVD and selective oxidation techniques allows reproducible mass production of SCDNs. We have demonstrated the formation possibility of NV, SiV and GeV centers in SCDNs in the course of the CVD synthesis process and are currently working on the optimization of the SCDN probes for quantum sensing.

This activity is in close cooperation with ULM University, Institute for Quantum Optics, Germany 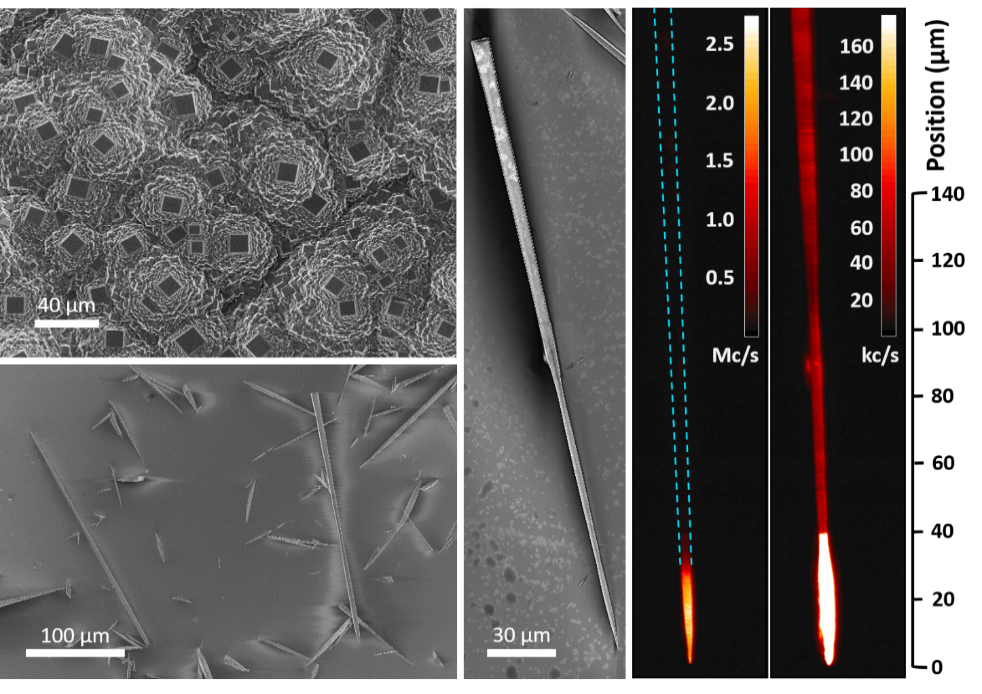 Scanning electron microscopy images of carbon film contained SCDNs in its structure (a top), extracted SCDNs on a silicon plate (a bottom), individual SCDN (b) and confocal PL maps of individual SCDN (c, d) obtained with 740(10) bandpass filter. The dark rectangles in the (a top) are bases of the SCDNs. The PL maps (c and d) are for the same data and differ only in the maximum displayed intensity level. The Mc/s and kc/s in the scales indicate megacounts and kilocounts of photons per second respectively. The blue dashed lines in (c) present the outline of the SCDN. 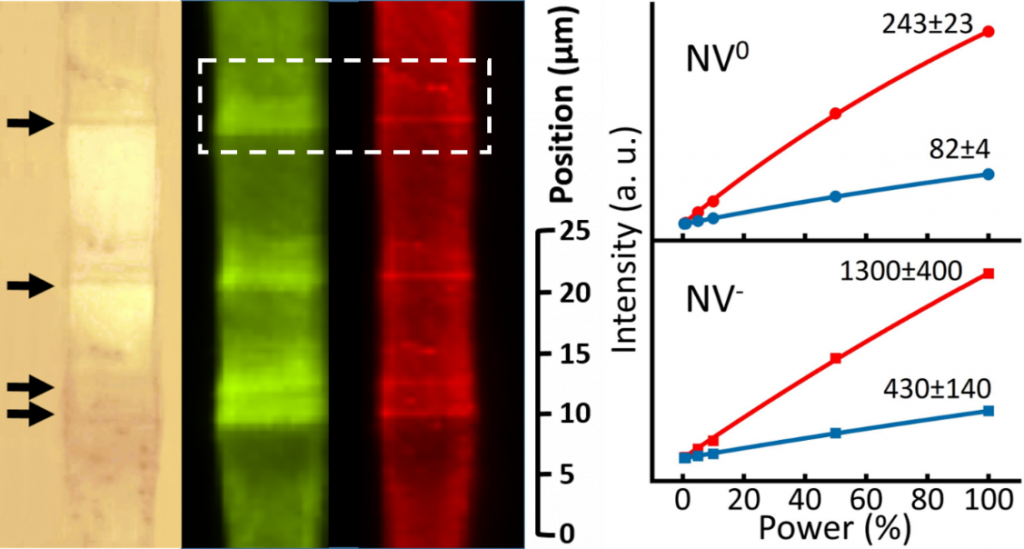 Optical image (a), confocal PL maps at 575 nm (b) and 637 nm (c) of SCDN obtained with short nitrogen addition during synthesis and dependences of PL intensity on laser power for NV0 (top) and NV- (bottom) centers. The black arrows in (a) point to areas formed with nitrogen addition to the gas phase. The dashed white rectangle in (b) and (c) highlights the difference in NV0 and NV- distribution in the SCDN. The dependences of PL intensity on the laser power (d) are plotted for the bright areas (red) and for the dark areas (blue) of the maps. The power is specified as a percentage of maximal laser power. The PL saturation levels defined from the curves with calculated errors (in arbitrary units) are presented near the corresponding curves.